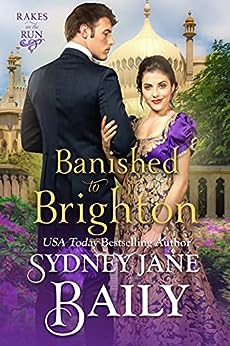 Lord James Hargrove has fallen out of favor with the Prince Regent. His punishment is an unwanted stay in Brighton, far from the London he loves. But a rake knows how to have a good time wherever he lands.

Glynnis Talbot is out of money and out of time. She needs a husband, preferably from among the bon ton. So far, her attempts to put the parson’s noose around a wealthy nobleman have failed. Bagging a nob in Brighton is her last hope.

James has nearly fallen into this lady’s trap before — getting caught in a compromising situation with no way out but an engagement. No, thank you! In this battle of the petticoat and the cravat, who will win?

These stand-alone books can be read in any order! Each Rakes on the Run novel contains a rakish hero, a saucy beauty, a steamy story, and a satisfying ending.

FF
2,0 van 5 sterren Bleh
Beoordeeld in het Verenigd Koninkrijk op 10 mei 2022
Geverifieerde aankoop
The heroine is calculating and deceitful. She travels around with no chaperone, no maid - and no-one thinks anything of it! Honestly? This would not happen under any circumstances! Booking in to an hotel on her own? She'd be kicked out on her rear end. Then she goes to live with the rake, again with no chaperone? She most certainly wouldn't be invited here, there and the next place with such lack of respectability. I don't really like rakes, I dislike their lack of morals but I thought the hero the more sympathetic of the two characters. Very disappointing. Stopped reading and deleted. These may be works of fiction, but some realism is expected.
Meer lezen
Misbruik melden
Vertaal recensie in het Nederlands

A. Hemingway
3,0 van 5 sterren Didn't care for
Beoordeeld in het Verenigd Koninkrijk op 12 mei 2022
Geverifieerde aankoop
Although as well written as usual I didn't care for this book. tThe morals were far too loose for the era with her kissed loads of strange men as was the idea the heroine could wander around all on her own without a maid. It also seemed to drag and go over and over the same idea's
Meer lezen
Misbruik melden
Vertaal recensie in het Nederlands

Foxwoods
2,0 van 5 sterren Slow and Disappointing
Beoordeeld in het Verenigd Koninkrijk op 2 februari 2022
Geverifieerde aankoop
This is the fourth book in the series that I've read. I found it disappointing and frustrating to read compared to the other three which I found quite enjoyable.I

Although I understand Glyniss's situation, I found her character to be deceitful and selfish. I struggled to finish reading the book.
Meer lezen
Misbruik melden
Vertaal recensie in het Nederlands

Barbara A. Watts
4,0 van 5 sterren Banished to Brighton, cute story
Beoordeeld in Canada op 13 augustus 2021
Geverifieerde aankoop
The third book in the Rakes on the Run series a story that held my interest throughout. Lord James Hargrove and Glynnis Talbot's story was a fun story to read. I received a copy of this book via Booksprout and am voluntarily leaving a review.
Meer lezen
Misbruik melden
Vertaal recensie in het Nederlands