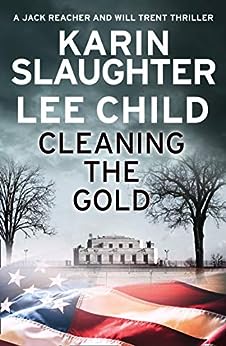 Cleaning the Gold: A gripping novella from two of the biggest crime thriller suspense writers in the world (English Edition) Kindle-editie

Get ready for a turbo-charged short read (80 pages) from two of the world’s biggest thriller writers – Karin Slaughter and Lee Child.

Jack Reacher and Will Trent

Twice the action
Twice the drama
Double the trouble

Will Trent is undercover at Fort Knox. His assignment: to investigate a twenty-two-year-old murder. His suspect's name: Jack Reacher.

Jack Reacher is in Fort Knox on his own mission: to bring down a dangerous criminal ring operating at the heart of America’s military. Except now Will Trent is on the scene.

But there’s a bigger conspiracy at play – one that neither the special agent nor the ex-military cop could have anticipated. And the only option is for Jack Reacher and Will Trent to team up and play nicely. If they can…

Praise for Karin Slaughter:
‘I’d follow her anywhere’ Gillian Flynn
‘A great writer at the peak of her powers’ Peter James
‘Her characters, plot, and pacing are unrivalled’ Michael Connelly
‘Big, dark, rich, satisfying, and bloody’ Stuart MacBride
‘Fiction doesn't get any better than this’ Jeffery Deaver
‘One of the boldest thriller writers working today’ Tess Gerritsen
‘A writer of extraordinary talents’ Kathy Reichs

Karin Slaughter is one of the world's most popular and acclaimed storytellers. Published in 120 countries with more than 35 million copies sold across the globe, her twenty-one novels include the Grant County and Will Trent books, as well as the Edgar-nominated Cop Town and the instant New York Times bestselling standalone novels Pretty Girls, The Good Daughter, and Pieces of Her. Slaughter is the founder of the Save the Libraries project--a nonprofit organization established to support libraries and library programming. A native of Georgia, she lives in Atlanta. Her standalone novel Pieces of Her is in production with Netflix, starring Toni Collette, and the Grant County and Will Trent series are in development for television.

Lee Child is one of the world's leading thriller writers. He was born in Coventry, raised in Birmingham, and now lives in New York. It is said one of his novels featuring his hero Jack Reacher is sold somewhere in the world every nine seconds. His books consistently achieve the number-one slot on bestseller lists around the world, and have sold over one hundred million copies. Two blockbusting Jack Reacher movies have been made so far.

Paddy4964
2,0 van 5 sterren Disappointing
Beoordeeld in het Verenigd Koninkrijk op 10 mei 2019
Geverifieerde aankoop
I looked forward to reading this short story as I am a big Jack Reacher fan and love Lee Child’s writing style. This was a massive disappointment, full of foul and obscene language so unlike Lee Child and his usual Reacher stories. As an ex MP myself with over 30 years in the military I am no prude but it, the language is all so unnecessary. I presume this is the ‘ladies’ influence, I hope normal service resumes with the new full Reacher book. The actual story was a reasonable read.
Meer lezen
76 mensen vonden dit nuttig
Misbruik melden
Vertaal recensie in het Nederlands

Gary D Chance
1,0 van 5 sterren A Piece of Junk
Beoordeeld in het Verenigd Koninkrijk op 10 mei 2019
Geverifieerde aankoop
A waste of time to read this silly nonsense that perverts the character of Will Trent into a Troglydite violent buffoon.. What a travesty of sincerety playing the reader for suckers by a ball of dung that's a satire of itself insulting the reader in every paragraph. There's no development just blatant abuse laughing at the reader all along for being an idiot to read this tripe. It's a gratuitous slam of the military and law enforcement for its own sake. What drivel. These two appear to be seeing just how much they can get away with by punching the reader in the brain to induce unconsciousness. Save your money. These two are cleaning out your pocket.
Meer lezen
64 mensen vonden dit nuttig
Misbruik melden
Vertaal recensie in het Nederlands

David Soulsby
1,0 van 5 sterren Don’t bother!
Beoordeeld in het Verenigd Koninkrijk op 17 mei 2019
Geverifieerde aankoop
If you’re thinking of buying this think again. Are 82 pages worth £3.99? Not really a good read in any sense! Only has a star rating because I couldn’t submit the review without one. A real disappointment.
Meer lezen
50 mensen vonden dit nuttig
Misbruik melden
Vertaal recensie in het Nederlands

jaydee999
3,0 van 5 sterren I was really disappointed overall. But I’ve paid more for undrinkable wine.
Beoordeeld in het Verenigd Koninkrijk op 21 mei 2019
Geverifieerde aankoop
1. Hated the end, if that’s what you can call it. Because it isn’t.
2. Even as a huge Jack Reacher fan, and with no “previous” on Will Trent, I found the adulation of Reacher over the top, and too one-sided. (3 gold bullion bars in one hand?)
3. I’m no effing prude, but I found the language seemed to be used for modern effect, and wasn’t necessary, as proven by previous great JR stories. Glad another reviewer felt the same way.
4. I have occasionally found the level of detail in Jack Reacher volumes a little tiresome. I sorely missed it in this short story.
5. I did enjoy the humour. Without spoiling anything, “big picture” is a quote that epitomises Reacher’s vigilante ethics.
6. As a wild guess, I would say that Karin wrote most of it, and Lee chipped in at key stages.
Meer lezen
37 mensen vonden dit nuttig
Misbruik melden
Vertaal recensie in het Nederlands

Lucii book-lover Dixon
5,0 van 5 sterren Fantastic! From two very talented authors!
Beoordeeld in het Verenigd Koninkrijk op 20 mei 2019
Geverifieerde aankoop
I’ve not read any of Lee Child’s books, though my mother adores the Jack Reacher series, but I really enjoyed this. Karin Slaughter is one of my all-time favourite crime-thriller authors, she’s up there at number 2, just under Patricia Cornwell.

Man, I didn’t know what to expect with this short story but it was fantastic. Full of rather unbelievable drama and tension. I’m still not 100% what it was all about but it was a great journey. And I’m sure I’m not the only one, but wasn’t this story left on a little bit of a cliffhanger? Oh how I want more of Will Trent and Jack Reacher together. They seemed to mesh well together, communicate on the same level and have the same vigorous mindsets. Though they both have vastly different personalities.

This was amazingly written with flourishing penmanship from both authors and I felt I could see myself as a fly following the characters around. I could envision everything around the characters; each new setting took root in my brain.