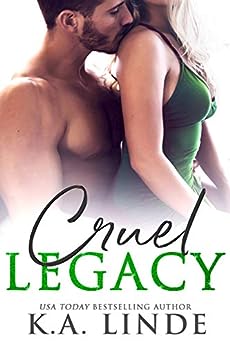 Smothering everything in its inky black.

I have turned into their worst nightmares.

And I will not rest until they pay.

For everything.
Meer lezen
Previous page
Next page

JuBoo
5,0 van 5 sterren Have absolutely loved this series!
Beoordeeld in het Verenigd Koninkrijk op 17 juli 2019
Geverifieerde aankoop
Natalie is a badass in this! Loved how she was able to stand up for herself and not let the bullies get away with it anymore. Enough was enough!

OMG Natalie had Penn are fab together! What a power couple, they could take over the world if they wanted.

This book is beautifully written, love how Natalie starts as a caterpillar, but then transforms and in the end she is set free into the beautiful butterfly she was always meant to be.
Meer lezen
Misbruik melden
Vertaal recensie in het Nederlands

Jade B
4,0 van 5 sterren Cruel Legacy
Beoordeeld in Australië op 18 augustus 2020
Geverifieerde aankoop
This book is edgy, and suspenseful and sexy, all the things a good dark romance book should be. I really enjoyed it!
Meer lezen
Misbruik melden
Vertaal recensie in het Nederlands

Cierra Holloway
4,0 van 5 sterren Deliciously delicious
Beoordeeld in de Verenigde Staten op 17 juli 2019
Geverifieerde aankoop
As you know, all good things must come to an end. It only took one day to read through it. (I actually forgot I preordered it lol). I liked there was an HEA, but the crew, in my opinion, is still problematic to me.

In this final novel, Natalie rose like the Phoenix and was proverbially intending to light the Upper East Side up in flames. In the third installment of the Cruel series, Katherine outed Natalie’s Olivia Davies persona. Before that, Lewis creepyish behavior and subsequent blacklisting broke her. She had no career. Her career is in shambles and had become a running joke to the Upper East side. Could you really blame her for wanting revenge?

Penn definitely grew up a lot, compared to the past installments. He really tried to do the right thing, which I’m happy for, but again, the “crew” mainly Lewis and Katherine, were so problematic to me. Katherine backstabs, lies, manipulates, and ruins people for her own selfishness and Lewis is control-freak who lies and manipulates his way to get what he wants. And to think he was once my favorite character! The audacity!

When I saw what Natalie was planning on doing, I knew immediately it would blow up in her face. Her actions created unintended consequences. It affected innocent people, who honestly are only guilty by association. I’m glad she had the sense and resolve to see the error of her ways.

The final novel had its impressive moments, like Jane for example, but in other ways it was lackluster. Natalie can still be just as problematic, impulsive, stubborn, resentful, grudge-holder, emotional, and at times, weak. I loved her in book 1 (or was it 2?) where she didn’t care about what others thought, that she marched to the beat of her own drum. When she began to “conform” all for the purpose of revenge, it didn’t sit well with me, but I suppose that’s the point of the character arc.

Loved the hot naughty scenes, the chemistry between Penn and Natalie. I loved seeing Penn in Natalie’s world in South Carolina and how completely different that life was from NYC. I love how they choose to allow their love to overcome their barriers because let’s face it, they’ve equally hurt each other, more so Penn than Natalie. Penn had a habit of keeping secrets to himself and what Natalie did was child’s play compared to what Lewis and Katherine (mainly her) did.

Penn at times, as much as I adored him, his naivety annoyed me. He was so in love with Natalie, he didn’t see what the hell she was up to, even if it was blatant. When ish hit the fan, he suddenly got surprised about the scope of what Natalie did to get her revenge and I’m quite sure she made it clear to him. To me, when it comes to the crew, he’s weak. Newsflash: just because you have history doesn’t mean you can withstand toxicity in any relationship!

Over all, great novel aside from a few technical errors and how I felt that toward the end, it was rushed and many issues were still left unresolved. Great read! Thank you, Ms. Linde for giving us Natalie’s and Penn’s world!
Meer lezen
4 mensen vonden dit nuttig
Misbruik melden
Vertaal recensie in het Nederlands

Jennifer H.
5,0 van 5 sterren ~ 5 Legacy Stars ~
Beoordeeld in de Verenigde Staten op 16 juli 2019
Geverifieerde aankoop
Holy Cow!!! K.A. Linde outdid her self with Cruel Legacy. She saved the best of the three books for the last. Even though I loved the first two books, Cruel Legacy was everything I hoped it would be and more!!! I devoured this story.

This book is filled with more angst, deception, lies, secrets and romance. Everything we read in the first two books comes to an end in this story. Cruel Legacy picks up right where Cruel Fortune ends. This ending was so intriguing I had a hard time putting it down. I truly couldn’t read it fast enough.

As with the other books, I can’t say much about the storyline, you need to let it all unfold for yourself. But I will say that this is NOT a standalone novel. Cruel Money and Cruel Fortune MUST be read before reading Cruel Legacy. This story is told primarily from Natalie’s POV but we do get some chapters in Penn’s POV also. This book really brought this cast of characters full circle ;)

I can also say that I think I fell in love with Penn and Natalie even more in this book. This is a couple I couldn’t help but want to root for them to get their HEA. Right from the start I wanted them together and to make it through all the drama. This book has ups and downs for both Penn and Natalie, but I loved watching them wade through all the challenges to see if they could come out stronger in the end.

Speaking of the end…..I LOVED it. I felt the author wrapped up this story perfectly. You truly are left with no unanswered questions and I had the biggest smile on my face.

There really is nothing else I can say about this book/series. Just trust me and read this trilogy!!! It is for sure one of my favorites of 2019!!!!
Meer lezen
Een iemand vond dit nuttig
Misbruik melden
Vertaal recensie in het Nederlands

MD
2,0 van 5 sterren Too Dramatic, even for the description...
Beoordeeld in de Verenigde Staten op 17 juli 2019
Geverifieerde aankoop
I have to be honest, I read the first third of the book and then skipped sporadically through the rest. After reading the first two books in the series, I was really interested to see how this would end and from the get go her want for revenge but then the way she reacted by so easily giving into and forgiving Penn just didn’t jive. It made her seem like she was still just being walked all over and silly, when she’s supposed to be this intelligent author out to teach others a lesson. I feel it should’ve taken them longer to get back together in order to provide tension and suspense for the reader. It made her character a lot less dynamic and after all the buildup from the previous book, it was a pretty big letdown. Definitely not my favorite book by Linde.
Meer lezen
2 mensen vonden dit nuttig
Misbruik melden
Vertaal recensie in het Nederlands
Alle recensies bekijken
Terug naar boven
Over ons
Verkoop bij ons
Amazon-betaalmethoden
We helpen je graag
© 1996-2021, Amazon.com, Inc. en dochterondernemingen