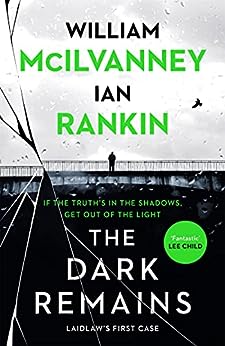 In this scorching crime hook-up, number one bestseller Ian Rankin and Scottish crime-writing legend William McIlvanney join forces for the first ever case of DI Laidlaw, Glasgow's original gritty detective. If the truth's in the shadows, get out of the light . . . Lawyer Bobby Carter did a lot of work for the wrong type of people. Now he's dead and it was no accident. Besides a distraught family and a heap of powerful friends, Carter's left behind his share of enemies. So, who dealt the fatal blow? DC Jack Laidlaw's reputation precedes him. He's not a team player, but he's got a sixth sense for what's happening on the streets. His boss chalks the violence up to the usual rivalries, but is it that simple? As two Glasgow gangs go to war, Laidlaw needs to find out who got Carter before the whole city explodes. William McIlvanney's Laidlaw books changed the face of crime fiction. When he died in 2015, he left half a handwritten manuscript of Laidlaw's first case. Now, Ian Rankin is back to finish what McIlvanney started. In The Dark Remains, these two iconic authors bring to life the criminal world of 1970s Glasgow, and Laidlaw's relentless quest for truth. --Deze tekst verwijst naar de paperback editie.

"He kicked the door open so the likes of Ian Rankin, Denise Mina and me could sneak through behind him."--Val McDermid, author of The Mermaids Singing

"The finest Scottish novelist of our time."--The Telegraph

"It is great entertainment, but McIlvanney's achievement is to transcend the conventions of the crime novel even while he observes them. The trilogy is one of the finest things in modern fiction, in the Chandler and Simenon class."--Spectator

"The Laidlaw books are like fine malt whisky--the pure distilled essence of Scottish crime writing."--Peter May, author of the Lewis trilogy

"Allan Guthrie probably comes closest to McIlvanney in his mix of humor and compassion, but even that top-flight crime writer doesn't do it with the same concentration."-- Peter Rozovsky, Detectives Beyond Borders

"A crime trilogy so searing it will burn forever into your memory. McIlvanney is the original Scottish criminal mastermind."--Christopher Brookmyre, author of When the Devil Drive

"The Laidlaw books are not just great crime novels, they are important ones. McIlvanney proved that crime writing could have both perfect style and huge ambition. Most of us writing crime fiction today are standing on the shoulders of giants. McIlvanney is one such giant."--Mark Billingham, author of Sleepyhead

"McIlvanney's prose is simultaneously sparse and lyrical. Short sentences, paragraphs and, indeed, chapters give the feel of a thriller to some beautiful writing."--Killing Time Crime

"There's no one like Ian Rankin."―Tana French, New York Times bestselling author of In the Woods

"One of Britain's leading novelists in any genre."--New Statesman

"Rankin is a phenomenon."--The Spectator

William McIlvanney is widely credited as the founder of the Tartan Noir movement that includes authors such as Denise Mina, Ian Banks, and Val McDermid, all of whom cite him as an influence and inspiration. McIlvanney's Laidlaw trilogy "changed the face of Scottish fiction" (The Times of London), his Docherty won the Whitbread Award for Fiction, and his Laidlaw and The Papers of Tony Veitch both gained Silver Daggers from the Crime Writers' Association. Strange Loyalties won the Glasgow Herald's People's Prize. William passed away in December 2015.

Born in the Kingdom of Fife in 1960, Ian Rankin graduated from the University of Edinburgh in 1982, and then spent three years writing novels when he was supposed to be working towards a PhD in Scottish Literature. His first novel The Flood was published in 1986, while his first Rebus novel, Knots & Crosses, was published in 1987. The Rebus series is now translated into twenty-two languages and the books are bestsellers on several continents. Ian has received an OBE for services to literature. He is also the winner of an Edgar Award and the recipient of a Gold Dagger for fiction and the Chandler-Fulbright Award. He lives in Edinburgh, Scotland, with his wife and their two sons.

Graham G Grant
3,0 van 5 sterren The philosophy of murder
Beoordeeld in het Verenigd Koninkrijk op 9 september 2021
Geverifieerde aankoop
Laidlaw is on the trail of a killer on the mean streets of Glasgow. The death of his legendary creator meant Rebus author Ian Rankin took up the challenge of writing a novel based on McIlvanney’s notes: a daunting task. It’s a prequel to the existing Laidlaw trilogy, set in 1972. Rankin and McIlvanney are very different prose stylists - Rankin’s style is unfussy, while McIlvanney’s often verges on poetry. Rankin wisely steers clear of trying to match the style of his mentor exactly. By the time the novel is properly under way, The Dark Remains broadly reads like a Rebus novel. Laidlaw inspired Rebus - and, it seems, Taggart. The original novels are excellent - Strange Loyalties is the best. Laidlaw was a big influence on a generation of ‘tartan noir’ crime writers. That means this novel had a lot to live up to. It’s far from a failure. We find out more about Laidlaw’s failing marriage. He’s a lot like Rebus in his maverick ways, but Laidlaw’s passion is philosophy — rather than old rock music. But the novel never quite clears the runway. It’s readable. But its cast of characters is all a bit River City (the Scottish TV soap sometimes featuring stereotypical Glasgow hoods). There are lots of gangsters in The Dark Remains, some of them a bit like Rebus’s own (increasingly quite dull) nemesis Ger Cafferty. Most of this novel concerns the internal machinations of gangs on the verge of warfare after the murder of one kingpin’s key lieutenant. It’s incredibly elaborate - and bluntly for the most part it’s hard to care (or figure out) what’s going on. The resolution has echoes of Maigret (perhaps Laidlaw is a philandering version of Maigret). Laidlaw himself was perhaps so influential as a character in terms of tartan noir that ironically he seems a bit cliched now (perhaps he was cliched when he was first created too). But detective fiction has to negotiate these cliches and give them new life. Laidlaw is so feted partly because there were only three books. McIlvanney left his fans wanting more; before he died, he was preparing to give them what they wanted. Now that they have it, does it work? Sort of — but not well enough. The key reason the original Laidlaw books worked was McIlvanney’s truly marvellous prose. That’s more or less missing from The Dark Remains. Rankin has a crack at it — and there are some inspired lines which echo McIlvanney’s style. It doesn’t quite come off. But it is a clever, fast read — and fans of both authors will probably enjoy it, despite its flaws.
Meer lezen
8 mensen vonden dit nuttig
Misbruik melden
Vertaal recensie in het Nederlands

Alexander Bryce
2,0 van 5 sterren So disappointing
Beoordeeld in het Verenigd Koninkrijk op 17 september 2021
Geverifieerde aankoop
With the late, lamented William McIlvanney and Ian Rankin sharing writing credit plus the rave reviews, I anticipated a masterful, gripping crime yarn. What a disappointment. I quickly tired of the ‘oh so witty’ dialogue, the frequently forced points of reference to 1972 Glasgow and the repetitive police/suspect/witnesses interviews . There are so many characters, without any real depth, thrown at the reader in the first couple of chapters , that I quickly lost interest in them. However I kept going until 55% into it when I thought ‘why am I reading this’ and abandoned it.
William McIlvanney wrote wonderful, captivating Scottish, crime fiction, but alas this is no where near the great man’s work.
Meer lezen
3 mensen vonden dit nuttig
Misbruik melden
Vertaal recensie in het Nederlands

chrisj
2,0 van 5 sterren Thin gruel
Beoordeeld in het Verenigd Koninkrijk op 11 oktober 2021
Geverifieerde aankoop
Reads like a preliminary sketch for a fully fleshed-out book that would have been better written by one of the authors on their own. Or perhaps an honest short story with fewer minor, unnecessary characters and the others properly developed. There is barely sufficient plot to justify this publication. Even the production is stretched to give the impression of a full-length novel: larger print and wide line spacing than other Rankin works (I checked). Can be read in less than a couple of hours. Most likely this will be taken to the local charity shop on my next trip.
Meer lezen
Misbruik melden
Vertaal recensie in het Nederlands

Dave Ross
4,0 van 5 sterren A fine novel
Beoordeeld in het Verenigd Koninkrijk op 11 september 2021
Geverifieerde aankoop
I have read and 're-read McIlvanney since I was a, boy, I'm a big fan of Ian Rankin, I'm a Glaswegian what's not to love. This is a fine example of tartan noir. No spoilers.
Meer lezen
2 mensen vonden dit nuttig
Misbruik melden
Vertaal recensie in het Nederlands

silly
1,0 van 5 sterren Disappointment
Beoordeeld in het Verenigd Koninkrijk op 17 september 2021
Geverifieerde aankoop
I am afraid this book did nothing for me .I bought it as I am a great fan of Rankin .For me Laidlaw did not ring true .I found the book depressing and hoped I would get into it but unfortunately this did not happen .
Meer lezen
Een iemand vond dit nuttig
Misbruik melden
Vertaal recensie in het Nederlands
Alle recensies bekijken
Terug naar boven
Over ons
Verkoop bij ons
Amazon-betaalmethoden
We helpen je graag
© 1996-2021, Amazon.com, Inc. en dochterondernemingen