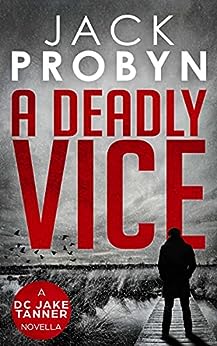 There’s no fate worse than inheriting a dead man’s debt.

Jake Tanner, a trainee detective constable with Croydon CID, is eager to impress his bosses. So when a body is found face-down in the city’s farmlands, head crushed, split in two, Jake jumps at the opportunity.

The victim is soon identified as Zeke Harrison. A successful businessman and philanthropist. A man who had it all.

But, as the investigation into his death develops, it becomes clear that Zeke had more secrets than success.

And he had his debts - debts that got him killed.

But now they've been passed on to someone else. And Jake must find out to whom before history repeats itself.

A Deadly Vice is the exciting introduction into the Jake Tanner universe.

Meet Jake today before everyone else does. Perfect for fans of Mark Billingham, Peter James, Simon McCleave, JD Kirk, Ian Rankin, LJ Ross, Joy Ellis, and Val McDermid. Download for free now to experience the new series that everybody is talking about.

owlstalker
2,0 van 5 sterren Promising, but ....
Beoordeeld in het Verenigd Koninkrijk op 24 mei 2021
Geverifieerde aankoop
Maybe a name to look out for in the future, but this story is marred by silly factual errors. Croydon is not a city, it's a town. I would say it's impossible for anyone to join as a detective straight from school. Training would be the first activity, then a spell in uniform. CID would come later according to suitability. Shotguns don't fire bullets.
Generally there are few typos, but some gobbledegook; e.g. "The living room Jake and Danika stood until they were offered a seat on the sofa." and "...the small of his computer screen." I gave up at 42%.
Meer lezen
3 mensen vonden dit nuttig
Misbruik melden
Vertaal recensie in het Nederlands

D. Elliott
4,0 van 5 sterren Depths of Depravity
Beoordeeld in het Verenigd Koninkrijk op 19 juni 2021
Geverifieerde aankoop
This cleverly titled thriller commences with a gruesome murder where the victim’s head is crushed in a vice – which indicates there is likely to be much violence – and there is – though why criminals resort to such excessive brutality is not clear. ‘A Deadly Vice’ is one of a series of Jake Tanner crime thriller cum police procedurals, and is at a stage when Jake is a trainee detective constable with the Croydon CID. Apart from a female fellow trainee he is working under an unappreciative superior with a set of colleagues who belittle him – but of course he has hidden talents that lead to stories of how he makes good.

Jake takes the vice murder as an opportunity to demonstrate his impressive abilities as he assesses the situation where though the first victim had a chequered past he is regarded by the police as reformed and is now a successful businessman and an admired local philanthropist. Years before Jake’s superior had arrested the victim and whilst he appears reluctant to investigate Jake exposes the victim’s secrets in a different world of human trafficking, prostitution, drugs etc. and he plumbs the depths of depravity when criminals fall out. ‘A Deadly Vice’ is quite short and has an abrupt ending, but it probably meets a major objective – it introduces Jake Tanner. As it stands it deserves a 4-star rating – but is sufficiently gripping and compelling to lead to a 5-star career for Jake – and his female colleague?
Meer lezen
Een iemand vond dit nuttig
Misbruik melden
Vertaal recensie in het Nederlands

Father Ted
3,0 van 5 sterren "It doesn't match the hype"
Beoordeeld in het Verenigd Koninkrijk op 12 juni 2021
Geverifieerde aankoop
This was one of those books that was okay, without ever catching fire. Several common ingredients got thrown into the mix, as with many crime thrillers these days. A nod to the forensic department and the guys in the morgue. A thread that covers girls trafficked from Eastern Europe to get exploited in the club frequented by the villains. Extreme violence against all and sundry throughout and a mad dash to wrap everything up - which was the whole point of the novella. To be a marketing tool to attract readers to the series. Back to the drawing board.
Meer lezen
Een iemand vond dit nuttig
Misbruik melden
Vertaal recensie in het Nederlands

Linda
1,0 van 5 sterren Short
Beoordeeld in het Verenigd Koninkrijk op 11 juni 2021
Geverifieerde aankoop
Not very long yet contains many errors, a couple of which are baffling - "the small of his computer screen", "moving like a vending machine throughout the club, dispersing the crowd". The interview scene wasn't realistic at all, so I will not be following this author, sadly.
Meer lezen
2 mensen vonden dit nuttig
Misbruik melden
Vertaal recensie in het Nederlands

jacw2000
3,0 van 5 sterren Disjointed, but promising
Beoordeeld in het Verenigd Koninkrijk op 17 november 2021
Geverifieerde aankoop
A grim murder in suburban Croydon, and sex trafficking in sleazy brothels. Tanner is a probationary detective, trying to make his mark as the newbie on the team.

I found it a bit disjointed - as if the author had been told to cut it down to fit some arbitrary chapter length or number of pages. The newbie seemed to be complaining about a lack of responsibility despite being put in charge of apprehending and interviewing the baddies. Maybe I turned over too many pages on my Kindle?
Meer lezen
Misbruik melden
Vertaal recensie in het Nederlands
Alle recensies bekijken
Terug naar boven
Over ons
Verkoop bij ons
Amazon-betaalmethoden
We helpen je graag
© 1996-2021, Amazon.com, Inc. en dochterondernemingen