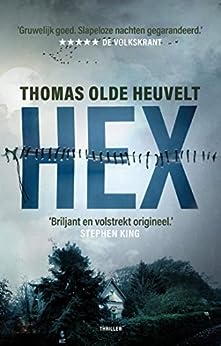 "HEX is creepy and gripping and original, sure to be one of the top horror novels of 2016." --George R.R. Martin "Thomas is a great writer, the next genre superstar." --Paul Cornell [A] touch of strangeness, of alienness, avoiding sub-Stephen King clichés. [Olde Heuvelt] has written five novels already, and publishers should be lining up to translate them. --The Wall Street Journal "HEX is reminiscent of vintage Stephen King, and I can think of no higher praise. Chilling, moving and . . . profound." --John Connolly "Olde Heuvelt's HEX sets ancient magic against contemporary technology to create a kind of dark fairy tale that seems ultimately believable in today's world. A terrific debut novel." --Jeffrey Ford "HEX is a thoughtful horror story, and one that is all the more chilling for its uncompromising view of humanity. . . . I found the story and its ending uncompromising and inevitable." --Robin Hobb "HEX takes the horror/thriller genre to a whole new level. It's deeply unsettling, wholly original, brilliantly written and contains scenes that will haunt you for a long time to come. I dare you to read it." --Sarah Lotz "Thomas Olde Heuvelt's HEX is a treat for all fans of dark fiction . . . a modern spin on the witch's curse story that forces us to take a closer look at ourselves. Who is really evil after all? It's may not be who you think. This is just the beginning and I can't wait to read his next one." --Ann VanderMeer "Hidden tensions and human weakness trigger a witch-hunt that boils over into persecution, scapegoating and a shocking denouement. A powerfully spooky piece of writing." --Financial Times "The best horror debut since John Ajvide Lindqvist's Let the Right One In." --Alan Kelly, Rue Morgue "Equal parts Stephen King and The Cabin in the Woods, Thomas Olde Heuvelt's novel is a pop page-turner with an intriguingly weird ambience . . . a funny, surprising and eerie novel." --SFX Magazine "Olde Heuvelt offers up a truly terrifying parable about mankind's depravity and the depths of evil of which we are capable. The story is not merely unsettling, it is horrifying" -Kirkus Reviews "[I]ntriguing premise . . . Heuvelt develops his characters enough to give their tragic lives resonance" --Publishers Weekly [S]imilarities to early Stephen King . . . Spielbergian in the way Olde Heuvelt shows supernatural goings-on in the midst of everyday life . . . It's a fabulous, unforgettable conceit and Olde Heuvelt makes the most of it." --The Guardian "Heuvelt's masterfully frightening debut will haunt the reader for days afterward." --Book Riot "A great read for fans of The Blair Witch Project or The Crucible. " --Booklist "[O]ne of the most original, clever, and terrifying books to be published in the 21st century". --New York Journal of Books "An entertaining read with a chilling concept. Not for the faint hearted." --Brave New Words "Truly absorbing and keeps you locked into the horrifying events as they unfold." --Fantasy Book Review --Deze tekst verwijst naar een alternatieve kindle_edition editie.

Dutch novelist Thomas Olde Heuvelt (1983) is the author of five novels and many short stories of the fantastic. His short fiction has appeared in English, Dutch and Chinese, among other languages. He won a 2015 Hugo Award for his novelette The Day the World Turned Upside Down. He has also been awarded the Harland Award for best Dutch fantasty on multiple occasions, and was nominated for the World Fantasy Award. Olde Heuvelt wrote his debut novel at the age of sixteen. He studied English language and American literature in his hometown of Nijmegen and at the University of Ottawa in Canada. Since, he has become a bestselling author in The Netherlands and Belgium. He calls Roald Dahl and Stephen King the literary heroes of his childhood, creating a love for grim and dark fiction. HEX is Olde Heuvelt's world wide debut. Warner Bros is currently developing a TV series based on the book. --Deze tekst verwijst naar een alternatieve kindle_edition editie.

THOMAS OLDE HEUVELT is a Dutch author of several novels, including HEX, and many stories of the fantastic. He has been called One of Europe's foremost talents in fantastic literature by BBC Radio. Olde Heuvelt has been nominated for the Hugo and World Fantasy awards for his short fiction and is a multiple winner of the Paul Harland Prijs for best Dutch work of the fantastic. --Deze tekst verwijst naar een alternatieve kindle_edition editie.
Meer lezen

Amazon Customer
4,0 van 5 sterren Parody or serious?
Beoordeeld in Nederland op 14 september 2016
Geverifieerde aankoop
Nice horror parody on life in a Dutch Village or in its US mirror image. The real horror is of course the normal life in such a place.
Meer lezen
Nuttig
Misbruik melden
Vertaal recensie in het Nederlands
Alle recensies bekijken

Kirsten Muntendam
5,0 van 5 sterren Epic horror
Beoordeeld in het Verenigd Koninkrijk op 8 september 2016
Geverifieerde aankoop
I read this book mainly because the author is Dutch, and I was pleasantly surprised to find out a Dutch author made it so big in the US. I now know why!! This is horror that keeps you on the edge of your seat. It's an original story that is tense without being obvious. And the best part for me was - having been raised in the Netherlands - it was so recognisable! Must read :)
Meer lezen
Misbruik melden
Vertaal recensie in het Nederlands
Alle recensies bekijken
Terug naar boven
Over ons
Verkoop bij ons
Amazon-betaalmethoden
We helpen je graag
© 1996-2021, Amazon.com, Inc. en dochterondernemingen