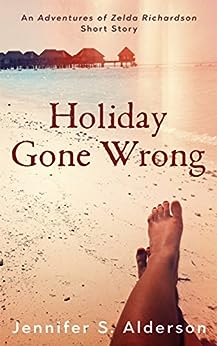 When a banana farmer tells her about the Disquís spheres he found on his property, she can’t resist going to the site. Her visit puts a deadly spin on her vacation and leaves her fighting for her life.

Despite Zelda’s best efforts to just relax and enjoy her trip, thrilling mysteries pop up at every turn. Will she ever be able to go on holiday without it turning into an international incident?

How did Zelda Richardson get from Nepal in Down and Out in Kathmandu to Amsterdam in The Lover’s Portrait? This short story will help fans of the Zelda Richardson Mystery Series better understand this unintentional amateur sleuth’s decision to study art history. It also gives new readers a taste of her tantalizing misadventures.

This short story is a PREQUEL to the Zelda Richardson Mystery Series.
Meer lezen
Previous page
Next page

Bobby Underwood
3,0 van 5 sterren A Pleasant Read
Beoordeeld in Australië op 1 juni 2018
Geverifieerde aankoop
Panama and Costa Rica are the locations which give this very short Zelda Richardson tale its color and flavor. It’s a tie-in with the author’s mystery series based around artifacts or art, and appears to be set between the first (Down and Out in Kathmandu) and second (Lover’s Portrait) entry in the series, which now has a third entry (Rituals of the Dead). Having read and reviewed Lover’s Portrait, which I enjoyed, I picked this up as a supplement to the series.

On the positive side, it’s light and breezy and moves quickly. You get some travelogue type color which makes for a pleasant read, and it doesn’t take long to begin and finish. A situation arises in Panama involving unwanted amorous advances from someone who won’t take No for an answer. Because of the situation, Zelda is forced to cut her time short in Panama and head for Costa Rica. She runs into mystery there, and someone insistent in a less amorous vein. It’s all very light and pleasant and there’s no real danger. This short bauble in fact feels like a colorful cozy mystery — very light on the mystery — set in pretty locations.

However, even in a story as brief as this one — the actual story portion ends at 63% on my Kindle — you can draw the reader in, give them a beginning, middle, and satisfying conclusion. I didn’t find that here. While I did enjoy this, I felt like I was just being rushed along from one place to the next. There is a difference between movement within a narrative, and quickness. The difference can sometimes be one of reader involvement, and that’s what I felt the problem was here. We get no setup. We are simply dropped into the water, figuratively speaking, with Zelda while on vacation. A short prolog or chapter of her arriving, acclimating the reader to the exotic setting, seeing it through Zelda’s eyes, would have helped toward that end. As it is, it felt like I was dropped into the second chapter, the first one missing.

That continues throughout this short story, at least for me. The reader is given no background about the guy (I don’t want to give too much away) with the hots for Zelda, for example. Just adding a paragraph or two, a scene where he’d seen her at the hotel bar or sun-bathing, whatever, and a moment showing how dangerous he could be would have lent that initial scene with a tiny bit of believability it doesn’t have. Instead this comes off like standard chick-lit cozy fluff. The entry in this series I read, Lover’s Portrait, was so much better than that. The small mystery Zelda uncovered in Costa Rica in this story continued with that same artificiality. It seemed rushed along, which is not the same as movement.

As I said, I did enjoy this, but if I’d had a better setup that immersed me into Zelda’s time in Panama and Costa Rica, and I’d had a couple more chapters to give this story background and real movement rather than just jumping quickly around, I’d have enjoyed this much more. Stuff written to accompany a series should be like a mini version of it, a satisfying bite. But this felt more like too much of a nibble around the outer edges.

Had this very short story been turned into a novelette by a few more brief but welcome chapters, I’d be much more enthused about it. It is pleasant, light and distracting for when you only have a short time for reading, which is a good thing. If that’s what you’re looking for this will do the trick, and you’ll find it enjoyable. As someone who has read and enjoyed Lover’s Portrait, however, I think it misses the mark slightly in giving readers a real sense of the series, at least the entry I read. Just a tick over three stars, because it’s a pleasant read.
Meer lezen
Misbruik melden
Vertaal recensie in het Nederlands

Book Squirrel
4,0 van 5 sterren A very enjoyable short read.
Beoordeeld in de Verenigde Staten op 26 juli 2018
Geverifieerde aankoop
‘Holiday Gone Wrong is a short read with elements of mystery and intrigue, but also some lovely comic moments, all of which make the reader want to know more of Zelda and her story. The author does a great job of balancing all of those elements without giving away the storylines of the other books in which Zelda features.

This short read is enriched by vivid, detailed descriptions of the exotic locations which really transported me to those places and brought the story to life. The author has cleverly conveyed both the beauty of the places and the joy of experiencing them, which definitely enhances the reader’s enjoyment of the story.

Nicole O'Connor
4,0 van 5 sterren A quick read.
Beoordeeld in de Verenigde Staten op 19 maart 2020
Geverifieerde aankoop
This short story held my attention through to the end. It is predominantly written in a narrative voice. A young woman goes on holiday and experiences a series of potentially dangerous encounters; none of which interlinked in the hurried climax. However, the writer appears knowledgeable about the places her protagonist visited and included plenty of descriptive scenery.
Meer lezen
Een iemand vond dit nuttig
Misbruik melden
Vertaal recensie in het Nederlands