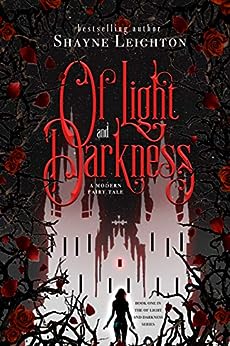 Shayne's first year out of high school, she penned, co-directed, and starred in the feature-length film, The Incubus, a paranormal romance which obtained distribution and opened in over fifteen theaters across South Florida among popular chains like Regal, AMC, and Cinemark. The Incubus has obtained a fan base of over 100,000 girls online, and has garnered the attention of reporters from the Miami Herald, CBS News, and NPR Radio. Leighton also starred alongside Scream Queen, Tara Cardinal in the film, Legend of the Red Reaper. Now, 20-year-old Leighton is excited to release her debut young adult novel series, Of Light and Darkness, set in contemporary Prague, as well as penning several other screenplays, a novel adaptation for Legend of the Red Reaper, an original pop/rock album, and acting in various film roles. You can visit Shayne online at: www.shayneleighton.com --Deze tekst verwijst naar een alternatieve kindle_edition editie.

Deborah
3,0 van 5 sterren An interesting read with a lot of potential.
Beoordeeld in het Verenigd Koninkrijk op 27 januari 2016
Geverifieerde aankoop
Valek is a vampire who finds a baby abandoned on the streets of Prague, now he shouldn't have been anywhere near Prague in the first place since the Regime's first law states any Occult Creature must never expose himself to any mortal and this obviously includes entering a human city but Valek's here and he can't ignore the baby so he takes her home.
Charlotte has never known anything else, she's been raised amongst the supernatural and for eighteen years this has been her life but life is becoming more difficult as the Regime seem intend on making it impossible for vampires to feed.
So far so good but I have very mixed feeling about this book and I'll try my best to explain why.
Firstly I loved the idea behind this book, magic villages where vampires, elves, witches and shifters etc all live and work together.
I struggled with the vampires and this could just be me but I have a romanticised view when it comes to them and in this book they suffer death again and again every morning.
Also due to the Regimes restrictions vampires are not allowed into human cities so Charlotte has to go out nightly and find 'food' for Valek. The people she brings back are drained completely which again I wasn't keen on but again that's just me it does make this a slightly darker more interesting read.
I also struggled initially with the changing relationship between Valek and Charlotte, he's raised her from birth and it was a bit creepy to find their relationship turning to romance, this could have been partly due to the fact that Valek seems very cold and almost indifferent towards her at times but since I am a hopeless romantic I soon became resigned that this was the way the book was going and I went along with it.
I wasn't sure at first about Valek and Charlotte since the blurb gives the impression of a love triangle of sorts.
Personally I needed more for this relationship to truly work for me, I didn't actually really like either character that much and while they did grow on me a bit it wasn't enough for me to be fully invested in them individually or as a couple.
I was also frustrated that the Regime seem to have been given almost free reign to have amassed such power.
It's worth mentioning there's a lot of mistakes in this book and it makes reading a little difficult, I kept going back and having to re-read parts, it's not major but I've put a couple of examples below:
1 - Her grasped both sides of her face.
2 - But I do not regret going what I did for you.
These were just chosen at random to give you an idea, like I said they're not huge but because of these the book doesn't flow as well as it should and slows down reading.
This all sounds very negative and that's not my intention, while at times I found myself a bit bored and skimming I never really considered not finishing this book.
The world that's been created here is fascinating and it has so much potential, it's more than it appears to be, it's well thought out with layers and nuances, little twists and surprises and well worth a read.
I'm a picky reader I know I am and I truly wish I wasn't, so many times I'll read fabulous reviews and wish I could feel the same way about the book in question, I've tried but it's not the way I am and therefore I try to write as honest a review as I can trying to look at both the good and the not so good and all things considered this is a strong 3 stars for me.
Meer lezen
Een iemand vond dit nuttig
Misbruik melden
Vertaal recensie in het Nederlands

Rebecca Ford
4,0 van 5 sterren World-building, vampires and romance
Beoordeeld in het Verenigd Koninkrijk op 12 september 2021
Geverifieerde aankoop
If you like interesting world building, unapologetic vampires, conflicting romance and a splash of magic then this is the book for you.
Meer lezen
Misbruik melden
Vertaal recensie in het Nederlands

glamgardener
2,0 van 5 sterren Badly written
Beoordeeld in het Verenigd Koninkrijk op 15 juni 2013
Geverifieerde aankoop
The story started well enough, but the use of words like ''drug'' instead of dragged put me off so much that I gave up reading the book altogether.
Meer lezen
Misbruik melden
Vertaal recensie in het Nederlands

letrasdesopita
3,0 van 5 sterren This is the offspring of: Twilight, Guillermo del Toro and Studio Ghibli.
Beoordeeld in Mexico op 7 oktober 2021
Geverifieerde aankoop
“I’d take a ray of sunlight to the chest if it meant you and I could be together forever. I was fated to find you, Charlotte. And I won’t let the monsters get you.”

I’m finally done with this book. I have a lot to say, but first a disclaimer. When ever I put a score to a book it isn’t entitled to mean it’s a bad or good book, what works for me may not work for you and vice versa. That being said, the tropes in this book are:

So this book, found out about the book on #BookTok, saw her books where on Kindle Unlimited, decided to give them a go. The world it takes place are supposed to be a mix between monsters of Guillermo del Toro with the heart of a Studio Ghibli movie, a relationship pretty much alike Twilight’s Edward and Bella, except that they’ve been together since our mc was a baby. (which is kind of weird), all those elements where the pick of my life as a reader, it’s all I love placed in a book, except that I didn’t like the execution as much as I thought I would.

The story follows Charlotte, a human girl living in Old Prague, a world of monsters and fae creatures. All her life she’s been a normal human, which makes her an outcast in the world she lives with her guardian, the vampire she is in love with, Valek. Together they’ll have to face the dangers that their love has to endure: a whole race of fae trying to extinguish the vampire race, and a Elf prince obsessed with Charlotte.

”I was a lost soul before I found you. You’re my beacon of light, Lottie. If you go, I will be lost again.”

The main thing that click with me in this story was the fact that this vampire man, Valek, who btw made me giggle each time he was with Charlotte, acts the way a vampire would, which resonated with me so much comparing him with Edward, (maybe they are cousins cause they even have the same age), he acted and did things that made more sense to a vampire, than Edward did. Contrary to Bella, Charlotte acted the WAY A HUMAN is supposed to in turns of being around a vampire, with actual fear and sense of survival, (no hate to my girl Bella, still love her very much). In terms if the relationship between them, I was so conflicted in the beginning when Valek found her as a baby, I thought they would have a father/daughter relationship, which was not the case, it scalded to a reciprocal relationship which I don’t mind, the book does not specify the age in which Valek was turn into a vampire, but he was young, and our girl is 19 which is good so it doesn’t bother me that much. I mean I guess I should have guess it with this quote of Valek when he found Charlotte:

”That night, I’d found meaning. I’d found her. I was to be alone no more.”

I really thought it was a cute fatherly quote, guess I was wrong.

The ending has a HUGE cliffhanger, and that I was mad about, cause I find it so hard for me to grasp something that motivated me to continue, and towards the ending it got really interesting and now I’ll have to read the second book, which I’m still not sure if I will, maybe later.

I recommend this books if you like magic, vampire romance and YA. Enjoy your reading. 📚✨ And remember..