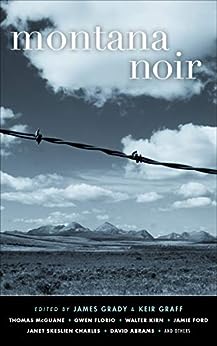 "These well-told tales offer an engrossing snapshot of Montana's fabled literary landscape. Every one, a worthy read."
--Lively Times

"The stories represent Montana in all its variety: the people; the land; the weather and its physical and psychological effects; social, cultural, and political issues; sexism and racism; Native American vs. White conflicts; urban vs. rural concerns; and more...If the intent of the Akashic Noir series is to capture the uniquely dark spirit of a place, then Montana Noir certainly succeeds."
--Popular Culture Association/Mystery & Detective Fiction

"Thirteen original stories plus a reprint by Thomas McGuane cover the Big Sky State in this thoroughly entertaining Akashic anthology, from desperate writing students in Missoula to a van of itinerant strippers working the Hi-Line paralleling the Canadian border."
--Publishers Weekly

"'Grit' is the best description of the collection of short stories compiled in Montana Noir because every single story has a thick skin of brutality, skeeviness, violence and just a dash of horror that makes the collection exceptionally good...An impressive set of works from a variety of writers that deserves to be read by many, especially those who want to lose themselves in the darkness of a Montana winter night."
--Missoulan

"If Montana Noir--the new short fiction anthology from Akashic Books released Sept. 5--seeks to teach us anything, perhaps it's that the Big Sky has always been home to its share of dirty deeds."
--Missoula Indepdendent

"From Polson to Glendive, Shelby to downtown Billings, the book ties together many of the state's best writers with stories from the seedier side of life."
--Great Falls Tribune

"Who would have imagined that murder and mayhem could be so much fun? In Montana Noir, a new collection of hardboiled short stories, 14 writers jump with evident joy into tales teeming with dead bodies, guns, strippers, booze, meth, weed and problematic stores of cash. And they take us to unexpected places, from the rough parts of Great Falls to a depressing corner of Billings Heights, from the loneliest stretches of the Hi-Line's Highway 2 to the vomit-stained sidewalk in front of the Party Palace in Butte."
--Last Best News

"Montana may not have the back alleys so common to noir but it has western justice which can be quick, brutal and final and that is as satisfying as anything found in the urban streets that typically attract the dark beauty of the noir genre."
--New York Journal of Books

"Montana Noir reveals that even Big Sky Country works just fine as a landscape for downbeats and deadbeats, cynics and gamblers, posers and schemers. This is a diverse collection with many hits...Noir isn't confined to a place. It's a state of being. It follows humanity wherever humanity wanders. And Montana Noir gives the genre more definition."
--Don't Need a Diagram (Mark Stevens blog) --Deze tekst verwijst naar een alternatieve kindle_edition editie.

Keir Graff was born and raised in Missoula, Montana. He is the author of four novels for adults (most recently The Price of Liberty), and two novels for middle-graders. Graff now lives in Chicago, where he is the executive editor of Booklist. --Deze tekst verwijst naar een alternatieve kindle_edition editie.

Silver Screen Videos
4,0 van 5 sterren Big Sky Crime
Beoordeeld in de Verenigde Staten op 25 april 2020
Geverifieerde aankoop
Some 15 years ago, a small publisher named Akashic Books embarked on a very ambitious project. They began publishing a series of anthologies, collectively called “Akashic Noir,” each set in a specific geographic locale and featuring stories rooted in that location. Some of their earlier works like “Chicago Noir” and “San Francisco Noir” were easy to put together, as these cities have a lengthy history of hardnosed literary crime. But the series has expanded to a lot of locations that might not seem ripe for anthologizing, such as the Big Sky Country of Montana. Surprisingly, however, “Montana Noir” features some excellent stories that give readers a real feel for the state.

I should first note that the word “noir” is used rather loosely in “Montana Noir.” Few of the stories qualify as classic noir, although all involve crime, usually rather brutal crime. These are not Mrs. Fletcher’s cozy rural mysteries, nor are they the type of crime stories traditionally found in “Alfred Hitchcock Mystery Magazine.” Instead, most of them portray a hardboiled slice of lowlife. They often a definitive ending as well, but they usually feel genuine.

“Montana Noir” comprises 14 stories, all written by authors who are either native Montanans or who spent considerable time there. The best-known contributors are James Grady, author of “Six Days of the Condor,” Thomas McGuane, who wrote “92 in the Shade,” and Walter Kirn, author of “Up in the Air.” However, nearly all of the contributors have substantial resumes. What they all possess is a knack for descriptive language and an ability to create a real sense of place. This is a Montana of small towns, a hit-and-miss economy, loneliness, and lots of empty spaces. Many of these stories wind up being depressing, but the emotions feel well-earned.

One of my favorite stories in the collection is “The Road You Take” by James Grady. It describes the life of a group of strippers who, along with their pimp/manager, go around the state in a minivan every month, hitting the circuit of low-rent strip clubs. Needless to say, it’s a monotonous life, at least until one of the women decides to do something about it. Another favorite is perhaps the only true mystery in the book, “Fireweed,” by Janet Skeslien Charles. The story is narrated by a high school student working as a waitress at the local café. Life is fairly dull until the body of a stranger is found in an empty field. The story is not so much about solving the crime. Instead, it’s about how the crime becomes the focus of conversation in a town where not much else happens.

“Ace in the Hole” by Eric Heidle is a story set in the present that could just as easily have taken place a century earlier. An ex-con, appropriately named Chance, returns to his hometown after serving a stretch for a botched dope run that ended with the marijuana cargo at the bottom of a river. His ex-employers now want him to make good the money that they paid for the lost shipment, and the story eventually turns into a showdown straight out of an earlier era. Perhaps the only story that goes outside the state line is “Oasis” by Walter Kirn. A young man who works at a pizza parlor fancies himself in love with a local stripper. You can probably guess what happens next, but the woman learns that leaving her would-be boyfriend behind is easier said than done. This story is one of the few with a conventional mystery-magazine storyline, but Kirn takes the time to develop his main character and the setting, making this feel like something that might occur instead of merely a Hitchcockian punch line.

To be fair, some of the stories in “Montana Noir” don’t work as well as the others, partly because some of them feel more slice of life than dramatically self-contained stories. However, there wasn’t a single clunker in the lot. Further, almost all of them had some great descriptive language throughout. More importantly, they didn’t feel like stories that were arbitrarily set in Montana because the author picked a rural or Western location at random. Instead, they felt organic to the state. I confess that I’ve never been to Montana, so I have no idea how realistic these stories are geographically or culturally. However, I’ve read various books set there, and the best of these stories rank right up there with them. This collection may not be true noir, but it’s noir done right.

Henry O. Biddle
4,0 van 5 sterren Nostalgia
Beoordeeld in de Verenigde Staten op 7 juni 2019
Geverifieerde aankoop
I was pleasantly surprised to find a short story written by an author who is a personal friend of ours. Her description of locales in and around her hometown brought back fond memories of a grand vacation to the west. Although I'm not fan of crime stories these ones are highly entertaining.
Meer lezen
Misbruik melden
Vertaal recensie in het Nederlands

Geraldine A. Dalbec
5,0 van 5 sterren Fun Reading!
Beoordeeld in de Verenigde Staten op 25 oktober 2017
Geverifieerde aankoop
I did enjoy this. I had to look up the meaning of Noir so I could understand better. Especially loved the Shelby stories as I had lived there.
Meer lezen
Misbruik melden
Vertaal recensie in het Nederlands