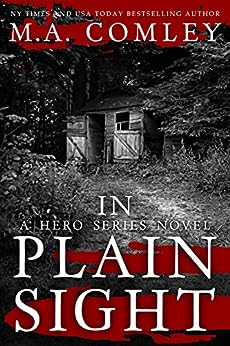 Not even the police.

DI Nelson is used to dealing with violent crimes but this one is personal.

He’s hunting a killer with an alarming agenda.

And the body count is rising daily.

Can Hero catch the killer before more innocent victims lose their lives?

A killer intent on hiding in plain sight.


From the bestselling author of the Justice series, with over two and a half million copies sold worldwide.
Meer lezen
Previous page
Next page

Mish Medhat
5,0 van 5 sterren A wonderfully gripping and twisted crime thriller that’s a real page-turner
Beoordeeld in het Verenigd Koninkrijk op 23 mei 2021
Geverifieerde aankoop
From the prologue, the reader is hit immediately by the audacity and brutality of the antagonist in this incredible story. As I read, my heart sank for the downed officers, and I knew as the plot unfolded, that the DI Hero Nelson of Major Incidents Team in the Manchester Police Force was going to be faced with many terrible crimes before the denouement greeted me.

I love Ms Comley’s way of writing. It is descriptive, action-packed and fast-paced. You feel you’re standing there, at the moment of the crime, watching as the scene plays out. The vitriol is in your blood as you witness the heinous antics of Myers, a sadistic, but calculated villain and the victims he blasts into the next life, tearing apart the lives of remaining loved ones in the process. A motive is given for his hatred of the police, but it doesn’t equal the true torture and terror he puts his victims through. One of the features that I found most disturbing was his cool, matter of fact demeanor, and his supercilious attitude that somehow, he would remain to have the upper hand and would out-fox the police despite their ‘throwing everything at the investigation’ approach. The ‘In Plain Sight’ title really says it all about Myers’ modus operandi! And he does everything with chilling insouciance that borders on the sociopathic. Myers is a man who enjoys taunting and baiting. He takes a warped pleasure in mixing everything up for Hero and his team. One minute he’s robbing, next he’s murdering, and then he switches again, this time to kidnapping. Poor Hero can’t take a beat before another crime hits hard and fast across his desk. At many times during the book you can feel his utter frustration and dislike of himself for not being able to find the clues with similar rapidity as the assailant commits his crimes. This strong sense of vexed weariness is something that makes Hero and his team so authentic, and makes the reader get right behind him, investing his character and hoping for his success.

In all the Hero series books, Ms Comley demonstrates a warmth of family. In one poignant moment Hero recalls when he was single, with no wife or children to go home to, and he realizes how lucky he is. Hero has developed, and grown into a responsible husband and father, from someone who used to gulp down beer after beer, to a man who drives past the pub to be in the loving arms of his family. Of course, it’s not all wine and roses, Ms Comley understands relationships. Her nuanced capturing of emotions; the ups and downs of familial and work life. The way in which he has to navigate through DS Julie Shaw’s sea of grief, self-pity and recalcitrance to being a team player, shows he’s a true leader, who despite the enormity of the investigation – with the bodies piling up and the public screaming for justice – he can still show humanity and compassion to his fellow officers. He does however, show he’s no push over, when DI Pitt, drafted in by Hero’s boss from Liverpool CID arrives with his team as reinforcements to the investigation, and sits behind Hero’s desk, sparks fly initially. The tension is obvious, and as a reader, one can’t help but consider this is the powder keg of near exploding egos that Myers almost wished into reality. Soon, the rules of engagement are drawn by Hero, and the two investigation teams launch into a happy and successful working relationship.

With all Ms Comley’s Hero series, there is always a sense of justice will prevail in the end. This sentiment mixed with the dogged tenacity of the police investigation teams is almost like a beacon that shines on every page. Irrespective of the horrendous crimes perpetrated, you just know Myers is going to over extend his hand, and Hero will be there to chop it clean off. The last few chapters had me racing through, keeping the candle of hope burning for Hero. No spoilers but this is nail-biting to the very end. A wonderful book, packed with heart, compassion and thirst for justice against all odds. A highly recommended read.
Meer lezen
Misbruik melden
Vertaal recensie in het Nederlands

C Knight
5,0 van 5 sterren A Manchester Hero
Beoordeeld in het Verenigd Koninkrijk op 4 juni 2017
Geverifieerde aankoop
Most people have come across Mel Comley’s writing through the Justice series but I’m different. It was Hero Nelson (unlike many) who introduced me to Ms Comley’s writing so he has a soft spot in my reading heart.

The Hero books are darker and more violent in my humble opinion than the Justice series and the author’s other solo crime series featuring DI Sally Parker.

In Plain Sight, similarly to Torn Apart the first in the Hero series, starts in a very shocking violent (there’s that word again) way and doesn’t stop there. Our perpetrator is one messed up individual toying with the Manchester Police, winding our Hero up at a time when emotions are high. Will the team catch this evil soul before he reeks more havoc?!

I have enjoyed all of the author’s books I’ve read so far, no I’ve not read them all but all the ones I’ve read have been addictive. I really haven’t wanted to put them down and In Plain Sight was no different. I read it in only a few hours, desperately wanting to keep up with the chase around the suburbs of Manchester.

If you haven’t read of the Hero Nelson books before and like your police procedurals dark and fast paced, you can not go wrong with this series. You’ve only got three to catch up one before the next one is out.
Huge thanks to Mel Comley for kindly sending me an e-copy of In Plain Sight
Meer lezen
5 mensen vonden dit nuttig
Misbruik melden
Vertaal recensie in het Nederlands

Elaine Fryatt
5,0 van 5 sterren A great read.
Beoordeeld in het Verenigd Koninkrijk op 23 maart 2017
Geverifieerde aankoop
This is the third book in the Hero series. It can be read as a standalone but best read in order I think. D.I. Hero Nelson is married to Fay and they have three children. His sister, Is also a member of the police force. It was lovely to see these characters back in a great thriller. The story starts when two policeman are killed by a violent and sadistic killer. Hero soon realises they are on the trail of a serial killer, who is seeking revenge, as further tragic events unfold. I felt the storyline was excellently written keeping the reader in suspense right up until the end of the book. My thanks to the author, Mel Comley, for another great book.
Meer lezen
2 mensen vonden dit nuttig
Misbruik melden
Vertaal recensie in het Nederlands

Hero is such a great name and I couldn’t think of a better named person being a DI. Certainly solving crimes in a way makes him just that, a hero. He does have a good team that work along side him so to be fair it is very much a team effort.

A story line with police officers being killed while on duty was certainly a harrowing one. I have to admit that this is one part of working in the police force I would absolutely hate, having to inform a loved one of a death. I really couldn’t think of anything worse and my heart was breaking along with the officers families. Also we forget about the big impact their deaths have on their colleagues and this is shown in the story.

In Plain Sight is without a doubt a gripping read with characters that really care about their job and the victims of the crimes. It’s one that can easily be devoured in one sitting and will have you wanting more.
Meer lezen
3 mensen vonden dit nuttig
Misbruik melden
Vertaal recensie in het Nederlands

John R Cowton
5,0 van 5 sterren What's in a name?
Beoordeeld in het Verenigd Koninkrijk op 22 maart 2017
Geverifieerde aankoop
This is the first of the Hero Nelson series I have read but is not the first in the series.
Initially I was a little put off by the name of the hero being Hero, however, what's in a name?
I think Colin Dexter didn't lose anything by giving his Inspector Morse the first name of Endeavour.
Once I got into the story, I soon got over myself and found Hero to be a very credible character and I even began to think that his dodgy name suited him.
The bad guy Bob Myers (normal name there) to describe him as ruthless, merciless killer doesn't even cut it. He gunned down whoever got in his way and therefore the police were no threat to him.
I would highly recommend to anyone who loves the crime fiction genre this superbly written fast paced thriller as one not to miss.
Meer lezen
Een iemand vond dit nuttig
Misbruik melden
Vertaal recensie in het Nederlands
Alle recensies bekijken
Terug naar boven
Over ons
Verkoop bij ons
Amazon-betaalmethoden
We helpen je graag
© 1996-2021, Amazon.com, Inc. en dochterondernemingen