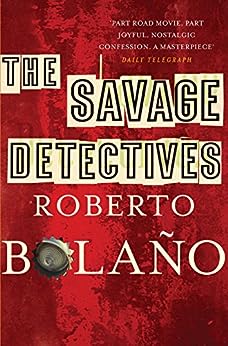 With an afterword by Natasha Wimmer.

Winner of the Herralde Prize and the Rómulo Gallegos Prize. Natasha Wimmer’s translation of The Savage Detectives was chosen as one of the ten best books of 2007 by the Washington Post and the New York Times.

Spanning two decades and crossing continents, theirs is a remarkable quest through a darkening universe – our own. It is a journey told and shared by a generation of lovers, rebels and readers, whose testimonies are woven together into one of the most dazzling Latin American novels of the twentieth century.

"The Savage Detectives, which, like 2666, has been translated with wonderful agility by Natasha Wimmer, catapulted [Bolaño] from obscurity to worshipful adulation."

"A bizarre and mesmerizing novel...It's a lustful story--lust for sex, lust for self, lust for the written word."

"An instant cult hit among readers and practically a fetish object to critics."

"An utterly unique achievement--a modern epic rich in character and event...[Bolaño is] the most important writer to emerge from Latin America since García Márquez."

"Combustible...A glittering, tumbling diamond of a book...When you are done with this book, you will believe there is no engine more powerful than the human voice."

"One of the most respected and influential writers of [his] generation...At once funny and vaguely, pervasively, frightening."

"The late Chilean writer Bolaño's 1998 (US 2007) novel begins with a seventeen-year-old's diary entries describing life in 1970 Mexico City. The narrative's second part is a meditation on the visceral realism movement founded by poets Ulises Lima and Arturo Bolaño, capped by their search twenty years previously for the poet Cesárea Tinajero. This Latin American On the Road presents a dreamlike patchwork of Lima and Belaño's adventures from which to reconstruct their literary pilgrimage. Narrators Eddie Lopez and Armando Duran reinforce the novel's sense of place with their rounded pronunciations. Essential."

"Wildly enjoyable...Bolaño beautifully manages to keep his comedy and his pathos in the same family."

This novel-the major work from Chilean-born novelist Bolano, here beautifully translated by Wimmer-will allow English speaking readers to discover a truly great writer...There are copious, and acidly hilarious, references to the Latin American literary scene, and one needn't be an insider to get the jokes: they're all in Bolano's masterful shifts in tone, captured with precision by Wimmer...Bolano fashions an engrossing lost world of youth and utopian ambition, as particular and vivid as it is sad and uncontainable.

In this dazzling novel which established his reputation as the García Marquez of his generation, Robert Bolaño tells the story of two modern-day Quixotes—the last survivors of an underground literary movement, perhaps of literature itself—on a tragicomic quest through a darkening, entropic universe. --Deze tekst verwijst naar een alternatieve kindle_edition editie.

Born in Chile in 1953, Roberto Bolaño fled to Mexico after the military government took power in the late 1960s. There he helped found the infrarealist movement. He later settled with his wife and children in northern Spain, where he died in 2003. He received all of that country's highest literary awards, including the Romulo Gallegos Prize for The Savage Detectives. In 2004 he was honored by the First Conference of Latin American Authors as "the most important literary discovery of our time."

Born in Chile in 1953, Roberto Bolaño fled to Mexico after the military government took power in the late 1960s. There he helped found the infrarealist movement. He later settled with his wife and children in northern Spain, where he died in 2003. He received all of that country's highest literary awards, including the Romulo Gallegos Prize forThe Savage Detectives. In 2004 he was honored by the First Conference of Latin American Authors as "the most important literary discovery of our time."

Wordsmith
1,0 van 5 sterren Drivel!
Beoordeeld in het Verenigd Koninkrijk op 22 september 2021
Geverifieerde aankoop
Six hundred pages of nonsense! At least I think it was six hundred pages. It was only just over a hundred for me, which was more than enough!
Some sort of diatribe about a group of trendy teenage critics and trainee poets, all of whom consider themselves to be on the verge of brilliance. Oh, and the lead character, despite having no obvious endearing qualities, is a magnet to any woman he comes across.
Maybe that's how it is in Mexico. Maybe that's why James Taylor found it necessary to write a song about the place!
Meer lezen
Misbruik melden
Vertaal recensie in het Nederlands

Mr. R. Hale
2,0 van 5 sterren Hard going
Beoordeeld in het Verenigd Koninkrijk op 19 juli 2019
Geverifieerde aankoop
Unrewarding. Lots of sex early on. Fragmentary. Self-indulgent in the way that Kerouac was in ‘On the road’. (What is it about poets?) There are many writers so much more worth reading - try Gabriel Marquez
Meer lezen
5 mensen vonden dit nuttig
Misbruik melden
Vertaal recensie in het Nederlands

Buddyboy
5,0 van 5 sterren Originality
Beoordeeld in het Verenigd Koninkrijk op 15 februari 2022
Geverifieerde aankoop
If you like novels that take you on a long rambling journey, you will love this book.
I cannot praise it highly enough for its originally and ability to engage the reader in the detail of life.
Meer lezen
Misbruik melden
Vertaal recensie in het Nederlands