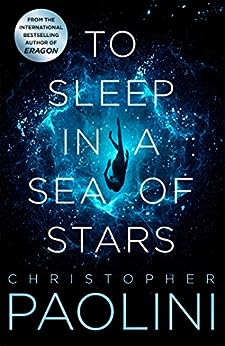 To Sleep in a Sea of Stars (English Edition) Kindle-editie

"A powerful piece of SF, with intelligent writing and big ideas."--Adrian Tchaikovsky, author of Children of Time

"Fans of all kinds, one can be sure, will come to question, and stay to explore."--The Wall Street Journal "The skills honed in his YA fantasy series, Inheritance (Eragon, 2003), are on full display here in his vibrant world building, especially in the mythology of the alien tech. Paolini populates this universe with a large cast of interesting and relatable characters, and mostly avoids reductive good guy/bad guy dynamics, lending the story a sincere emotional depth. Highly recommended for fans of James A. Corey's The Expanse series and for fantasy fans willing to try space opera."--Booklist, starred review "Dazzles with otherworldly delights--and unearthly nightmares."--Newsweek

"This is Paolini's best book so far, skillfully done, brilliantly imagined and cleverly executed. It's accessible and engaging and left us wanting more."--Starburst Magazine

"Has that charm that is unique to [Paolini's] writing. The ending was fantastic, big and exciting and with the same outside-the-box thinking I now expect from one of Paolini's endings."--Novel Knight "The character cast in To Sleep in a Sea of Stars is perfection. Kira is my queen of thorns, and I would trust her with my life and with the fate of humanity."--Ink and Plasma "Sure to be one of the biggest literary moments of the year."--The Portalist "Just as he did with his fantasy series, Paolini again captured my complete attention with the sheer breadth of his imagination."--By Hook or By Book Praise for Christopher Paolini: "An authentic work of great talent."--New York Times Book Review "Paolini is a spellbinding fantasy writer."--The Boston Globe

To Sleep in a Sea of Stars is a masterful epic science fiction novel from the New York Times and Sunday Times bestselling author of the Inheritance Cycle, Christopher Paolini. Kira Navárez dreamed of life on new worlds Now she’s awakened a nightmare During a routine survey mission on an uncolonized planet, Kira finds an alien relic. At first she’s delighted, but elation turns to terror when the ancient dust around her begins to move. As war erupts among the stars, Kira is launched into a galaxy-spanning odyssey of discovery and transformation. First contact isn’t at all what she imagined, and events push her to the very limits of what it means to be human. While Kira faces her own horrors, Earth and its colonies stand upon the brink of annihilation. Now, Kira might be humanity’s greatest and final hope . . . --Deze tekst verwijst naar een alternatieve kindle_edition editie.

Christopher Paolini was born in Southern California and has lived most of his life in Paradise Valley, Montana. He published his first novel, Eragon, in 2003 at the age of nineteen, and quickly became a publishing phenomenon. His Inheritance Cycle--Eragon and its three sequels--have sold nearly 40 million copies worldwide. To Sleep in a Sea of Stars is his first adult novel. --Deze tekst verwijst naar de paperback editie.
Meer lezen

P. M. Knight
1,0 van 5 sterren Pity the book wasn't written by a competent author
Beoordeeld in het Verenigd Koninkrijk op 27 oktober 2020
Geverifieerde aankoop
How did this get past the proof reader and the publisher? Was it proof read by a year four? I managed to get to page 55 and realised that this author hasn't a clue about sentence construction. If you are not concerned about things likes sentence construction and grammar then read on. When I read a book I assume that the author will look after such technical issues i.e they have the the basic writing skills and I,as the reader, can concentrate on the main story, characters and ideas. Sentences and paragraphs should flow off the page through the mind of the reader without being read through twice because you cannot believe how badly formulated they are and thinking to yourself 'I would have constucted that differently'. I am no scholar but I have rarely been so aware of such poor writing in the many books I have consumed, it was such a distraction I had to 'throw in the towel'. From other reviews I have read the science doesn't stand up that well either. I cannot comment on this, I didn't get that far, but if the attention to the science is the same as the attention to the writing then I can quite easily believe it.
Meer lezen
44 mensen vonden dit nuttig
Misbruik melden
Vertaal recensie in het Nederlands

Macro
1,0 van 5 sterren Starts quite well - then really, really disappoints
Beoordeeld in het Verenigd Koninkrijk op 23 november 2020
Geverifieerde aankoop
I don't get how so many reviewers were so enthusiastic about this. I don't often give up on a book, but I quit reading this one half-way through. At the outset, it seemed a reasonably interesting space opera romp with some potentially engaging characters - though the main character's love story is a bit gushy, like something out of a trashy romantic novel. By the mid point I really began to lose hope. Much of the plot is completely implausible, with sudden twists that just don't make any sense except that the author needed something to propel the story on. The aliens are not particularly alien, more like monsters out of some YA horror story. The characterisation doesn't live up to any of its early promise either. All the soldiers are real tough guys, the 'kid' is a real wide eyed innocent, the hero doesn't seem to have any problems with just ignoring pain and injury, and look! -just when it looks like the end of the world has come, some of the mindlessly aggressive enemy aliens turn out to be a liberal rebel wing who actually like humans and want to help!
Overall summary: starts quite well but degenerates into trite rubbish. I have no idea how it ends. Life is too short to waste reading stuff like this.

Dorothy Butler
2,0 van 5 sterren Page turner
Beoordeeld in het Verenigd Koninkrijk op 8 maart 2021
Geverifieerde aankoop
I’m still reading this book and almost at the end. Brilliant. I have to edit this review as now I have finished the book and am disappointed in it. It was a page turner then became a will it ever end. It turned from fairly good sci fi into enchantment fantasy, lord of the rings stuff and magic. As I was reading it, I thought I may have lost the ability to read clearly but it’s just very badly punctuated and makes you read things twice to be clear. Maybe this was written in a different language and wasn’t translated as well as it could have been. Bought it for kindle at £9.99. Will never spend that kind of money on this author again. Feel sad at how much hope I had for this book.
Meer lezen
10 mensen vonden dit nuttig
Misbruik melden
Vertaal recensie in het Nederlands

xyz574
3,0 van 5 sterren Reads like a YA Fantasy novel
Beoordeeld in het Verenigd Koninkrijk op 1 januari 2021
Geverifieerde aankoop
I made it through the first third quite happily, then gradually found it more and more repetitive and superficial, gave up about 65% the way through, just plain bored.

Not all sci-fi has to be hard sci-fi, but this is too "soft" to really fit the genre at all -- the protagonist has a magic suit that discovers new abilities and exposition happens when the suit conjures up a vision to motivate a plot device. The shipmate characters are superficial and tokenistic.

It all just feels like something I could have got into as a teenager, but as an adult there are far better novels out there.

Daniel jobling
5,0 van 5 sterren Mind blowing
Beoordeeld in het Verenigd Koninkrijk op 29 september 2020
Geverifieerde aankoop
For me this book is probably the most excited I've ever been for a book so much so I preordered it the first time I've ever pre ordered anything. This story is so huge and vast which is where you can sometimes you can see the end of a book coming which never happened because of some very well done twists and the characters in this book feel unique. Some of which have become some of my favourite characters anywhere for some reason gregorovich made me hear Paul bettany. If you pick up the book eat the path is all I can say and you may get a Newt take on these types of books (one inside joke you will understand upon reading)
Meer lezen
7 mensen vonden dit nuttig
Misbruik melden
Vertaal recensie in het Nederlands
Alle recensies bekijken
Terug naar boven
Over ons
Verkoop bij ons
Amazon-betaalmethoden
We helpen je graag
© 1996-2021, Amazon.com, Inc. en dochterondernemingen