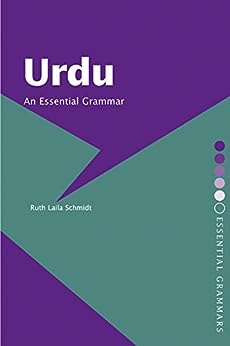 Engels editie Ruth Laila Schmidt (auteur) Indeling: Kindle-editie
Alle verschijningsvormen en edities zien
Sorry, there was a problem loading this page. Try again.
Urdu: An Essential Grammar is a reference guide to the most important aspects of the language as it is used by native speakers today.
The complexities of Urdu are set out in short, readable sections. Explanations contain minimal jargon and emphasis has been placed on the aspects of Urdu that pose a particular challenge for English-speaking students.
Features include:
* language examples throughout in both Urdu script and romanization
* user-friendly layout
* detailed contents list
* comprehensive index.
Urdu: An Essential Grammar presents a fresh and accessible description of the language and will prove invaluable to students at all levels.
Meer lezen
Previous page
Next page
Vanwege de bestandsgrootte kan het langer duren voordat dit boek is gedownload
Kindle e-readers
Gratis Kindle-leesapps
Alle ondersteunde apparaten bekijken

P Hughes
5,0 van 5 sterren Essential grammar for Urdu A level students.
Beoordeeld in het Verenigd Koninkrijk op 4 augustus 2014
Geverifieerde aankoop
The Urdu script in this book is clearly printed and presented. Grammar at the best of times is a mind field for me however this book was invaluable to me whilst I was studying Urdu A Level at night school.
You can dip into each section read the grammar usage and see some examples as well. This is an essential book for A-level students or for people who wish to learn Urdu as a second language.
Meer lezen
2 mensen vonden dit nuttig
Misbruik melden
Vertaal recensie in het Nederlands

Gus
5,0 van 5 sterren probably the best grammar available
Beoordeeld in het Verenigd Koninkrijk op 26 januari 2013
Geverifieerde aankoop
I'm a native English speaker who had to learn Urdu for work. This is by far the best grammar book I found (and I have looked at many, both in the UK and in South Asia).

Not recommended for absolute beginners, but once you reach an intermediate stage, this will prove invaluable.
Meer lezen
5 mensen vonden dit nuttig
Misbruik melden
Vertaal recensie in het Nederlands

Kindle Customer
5,0 van 5 sterren for those who want to understand urdu grammar
Beoordeeld in het Verenigd Koninkrijk op 27 januari 2014
Geverifieerde aankoop
it is best purchase.i teach GCSE and it helped me to give them basic grammaticconcepts and understanding of urdu sentence formations
Meer lezen
Misbruik melden
Vertaal recensie in het Nederlands

Patrick Barrett
5,0 van 5 sterren Who this book works for
Beoordeeld in de Verenigde Staten op 25 september 2007
Geverifieerde aankoop
Mr. Poser's review missed the point of this book, I think. Having studied from Barker off and on over many years, I passed over Essential Urdu both at conferences and libraries until the other day when I checked it out just to.... check it out. I haven't been able to put it down; I even read it while I'm cooking.
Despite the reviewer, Mr. Prendergast, who said the book was good for beginners, too, I believe it is my vague familiarity with Urdu which gives the book so much impact on my understanding of how the language works. IMHO, only a linguistically sophisticated person would grasp the import of the fascinating structures found in everyday Urdu, let alone in the many borrowing from Arabic, Persian, Hindi, English, and so on. (One of my great frustrations is that when I trot out a new Urdu word for, say, school registration, my friends say, "Oh, we just say 'registration'").

To be fair to Mr. Poser's complaints, I do believe it is my wide if not deep readings in linguistics plus my study of Barker and others, including the Russian Klyuyev, that allow me to 'fill in' some of the gaps he cites. So, indeed, it may not be for beginners.

But let me cite some elements of the book that I found so enlightening and helpful. The sections on particles and interjections, courtesy forms,
time and dates, and causatives were particularly useful to me. Let me be clear here, I am comparing this book to all other such manuals; it could be that all in this series are as careful about covering as many aspects of speech as possible, but my experience of many years in using grammar manuals of many languages is that these elements are often skipped or slighted, or, at least, not presented in a compact way.

And I think it is this latter point that is both a strength and a bit of a put-off in the book. The long pages of forms are not a way to learn those forms; they must be learned through use, not memorization. But as Prof. Schmidt lays the paradigms out, it does clarify them for the person who already has some of the forms internalized through use.

So, for me, reading and annotating this book for my use has been a series of epiphanies. I especially liked the examples of how the play of transitive/intransitive and causative forms allows a range of expression typically represented in English by totally different words. In teaching Spanish, I found it important to explain how Spanish vocabulary, smaller in toto than that of English, supplements meaning through derivation. This section explains how causatives do that in Urdu (not to say Urdu's lexicon is small by any means!).

I recall when an eminent scholar of Urdu was so kind as to e-mail me about my on-again, off-again study of the language and tell me that the language was pretty simple. When I responded that the morphology may be simple compared to Russian or Latin, but that Urdu more than compensates in the complexity of word-formation and syntax. You have only to read Prof. Schmidt's helpful gathering of ways to express obligation, probability, and so on, to realize that.