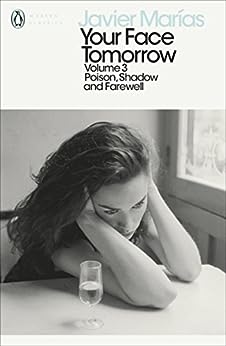 Javier Marías is an award-winning Spanish novelist. He is also a translator and columnist, as well as the current king of Redonda. He was born in Madrid in 1951 and published his first novel at the age of nineteen. He has held academic posts in Spain, the US (he was a visiting professor at Wellesley College) and Britain, as a lecturer in Spanish Literature at Oxford University. He has been translated into 34 languages, and more than six million copies of his books have been sold worldwide. In 1997 he won the Nelly Sachs Award; the Comunidad de Madrid award in 1998; in 2000 the Grinzane Cavour Award, the Alberto Moravia Prize, and the Dublin IMPAC Award. He also won the Spanish National Translation Award in 1979 for his translation of Tristram Shandy in 1979. He was a professor at Oxford University and the Complutense of Madrid. He currently lives in Madrid.

His most moving and personal work to date.--Megan Doll

A seriousness of purpose, an eagerness to engage with ... metaphysical questions and to incorporate them into a gripping story.--Tess Lewis

A literary tour de force ... as much about the past from which we are made as the present we have become.

The strange mixture of high cultural references and Jaques' essentially thriller-like story line, make for a reading experience like no other.

Here's the wonderfully parenthetical operations of a human mind in the 21st century.--Mauro Javier Cardenas

He mediates thriller or noir scenarios through a formidably erudite and elegant and sophisticated consciousness.--Mark Ford

Quite unlike anything else today.... One of the finest novels of modern times.--Tim Martin

The conclusion...is to be reminded of the intricacy with which he has fitted his pieces into the larger part.--Colin Torre

This brilliant trilogy must be one of the greatest novels of our age.--Antony Beevor ""Books of the Year" " --Deze tekst verwijst naar een alternatieve kindle_edition editie.

DFS
5,0 van 5 sterren Contemporary literature's greatest writer?
Beoordeeld in het Verenigd Koninkrijk op 4 januari 2015
Geverifieerde aankoop
One of the very greatest of contemporary writers completes his dazzling trilogy (in fact, one narrative in three long parts) of espionage that only superficially tells a story of the intrigues of MI5/MI6 and its shadowy members. The real story here is of love and brutality, friendship and manipulation and Marias uses the moments between plot points (and there are few of these) to digress onto major metaphysical and other subjects of concern, in particular, the question of veracity in narrative and the impossibility of believing anything one is told or having heard it, being able to divest oneself of the story and its personal ramifications. One is reminded of a Proustian style but Marias is far from Proust in his concerns and perhaps is closer to Beckett in the use of internal dialogue and the overarching element of black comedy that is threaded throughout this great trilogy.
Meer lezen
3 mensen vonden dit nuttig
Misbruik melden
Vertaal recensie in het Nederlands

R. M. Peterson
5,0 van 5 sterren This literary trek comes to an end. Conclusion? Worthwhile, but neither great nor essential.
Beoordeeld in de Verenigde Staten op 17 mei 2010
Geverifieerde aankoop
This is Volume Three of a 1273-page novel. It would be unwise to read Volume Three without having first read Volumes One and Two (which I have separately reviewed on Amazon). The real question, then, becomes whether reading all 1273 pages is a good use of one's finite reading time. That, of course, entails consideration of YOUR FACE TOMORROW ("YFT") in its entirety. Before turning to that issue, a few paragraphs on Volume Three.

In Volume Three, the first-person narrator, Jaime (or Jacobo or Jacques or Iago) Deza continues his story of working in London for an unnamed section of British intelligence (MI6 or SIS). The group is engaged in "interpreting" people - observing or spying on them, often from behind one-way mirrors or by watching videotapes, and then analyzing their character and personality and predicting how they would (or will) act in certain situations in the future. (What will be thy face tomorrow?) It fits nicely with Deza's voyeuristic tendencies as he passively floats through life, and although unusual it seems to be a fairly innocuous way of making a comfortable living. In the middle of Volume Three, Deza returns to his native Madrid for a two-week visit to his estranged wife Luisa, his two children, and his elderly father. Once there, Deza, to protect his wife and children (as he sees matters), is roused from his passive mode of existence and spurred to take action of a violent form. He then returns to London to find out that one of his seemingly innocuous interpretations (of a pop/rock star!) has had violent, lethal consequences. The synchronicity of these events raises all sorts of questions about whether it is possible to chart a moral course of conduct through life. (Or, is it better, in the words of the very first sentence of Volume One of the novel, to "never tell anyone anything or give information or pass on stories"?) These questions become even more thorny when Deza learns about clandestine activities ("black propaganda") during WWII in a final farewell conversation with his mentor Sir Peter Wheeler (who is modeled very closely after the real-life Sir Peter Russell, to whom YFT is dedicated). In the last 25 pages, the life of Jaime Deza - though now diminished by the deaths of two figures for whom there can be no replacement - settles into an uneasy stasis of sorts.

Volume Three is better than Volume Two, if not quite as satisfying or intellectually thrilling as Volume One. The predominant themes include secrets, treachery and betrayal, counterfeiting and forgeries (and thus, by implication, authenticity and the truth), war (and its invariable handmaiden, deceit), time and memory and personal identity, and love and separation. The book is rich with cultural references, both high- and low-brow, including Jayne Mansfield and "her triumphant, intimidating, transatlantic décolletage", Ian Fleming and the James Bond films, Robert Louis Stevenson, hip-hop and rap ("that witless, worthless drivel"), several paintings in the Prado, the film "The Godfather", and literary quotations from Shakespeare, Cervantes, St. Augustine, Ecclesiastes, and Eliot. Touchingly, and appropriately, the novel ends with a line from "The Streets of Laredo".

Throughout YFT, but probably more so in Volume Three than in the two earlier volumes, Marías reprises characters, events, and verbatim extracts from his earlier fiction. (The fellow who becomes Deza's nemesis was a relatively minor character in "A Heart So White".) Recognizing these references can be fun for a reader of the earlier works. In addition, many of the themes are the same, or are variations on or developments of themes from the earlier works. And the convoluted, obsessively meditative writing style is the same.

For me, the lesson of YFT is that speaking, or loving, or even living in this world entails risks of moral compromise. But an odd, and naggingly dissatisfying, thing about the novel is that for Marías "this world" is essentially a solipsistic world.

My conclusion: In YFT, Javier Marías bit off somewhat more than he could chew. It is a very ambitious work that does not altogether succeed. I want to emphasize that there are many brilliant passages and several memorable scenes. But there also is too much dead wood. The narrative often is rococo in nature, and at times it is disingenuous and redundant. There is too much authorial showing-off (or self-indulgence). I believe that the novel could have been pruned by at least a third without significant loss - and therefore should have been pruned. (Much of that lopping off would come from Volume Two.) Furthermore, the novel, as a whole, does not hang together; there are too many loose ends (for example, whatever happened with Incompara?).

YFT is very worthwhile fiction, but it is not great literature. It does not measure up to two previous novels by Marías - "Tomorrow in the Battle Think on Me" and "A Heart So White" - nor does it measure up to his "The Dark Back of Time". Those three works, to my mind, are great literature, and I recommend them highly to one and all. YFT, on the other hand, gets a qualified recommendation to those who already are Javier Marías enthusiasts. No doubt YFT would be richer upon re-reading, but I am pretty sure that I will never get around to doing so.
Meer lezen
10 mensen vonden dit nuttig
Misbruik melden
Vertaal recensie in het Nederlands

T. Marshall
5,0 van 5 sterren Not a light summer read
Beoordeeld in de Verenigde Staten op 9 februari 2017
Geverifieerde aankoop
Halfway through this third volume in the series, I am finally saying I love this book. But not always. It can be indefinably hard to face, which is a quality I find in some of the best fiction. I am not a devotee of first-person narrative fiction, still less of stream of consciousness, but this one works.
Meer lezen
Misbruik melden
Vertaal recensie in het Nederlands

Snidley274
5,0 van 5 sterren Mesmerizing.
Beoordeeld in de Verenigde Staten op 18 juni 2014
Geverifieerde aankoop
I wake eager to return to this mesmerizing trilogy. Marias has become one of my favorite authors, each of his novels has been a pleasure to read. The experience of reading his novels is like that of reading Proust or Joyce. Highly recommended
Meer lezen
Een iemand vond dit nuttig
Misbruik melden
Vertaal recensie in het Nederlands

chris flanders
5,0 van 5 sterren MARIAS IS A MASTER
Beoordeeld in de Verenigde Staten op 15 februari 2015
Geverifieerde aankoop
While my boyfriend Chris had already read this in Spanish, I ordered and read this volume (and the next). Marias is a fabulous writer, bringing to my mind Umberto Eco's works and the cinematic masterpiece Last Year at Marienbad. The book arrived in excellent condition. Thank you. Please do not stop offering these more obscure titles and the recommendations, as they often lead to discoveries of new writers. Thank you, Kathryn A. Dalheim.
Meer lezen
Misbruik melden
Vertaal recensie in het Nederlands
Alle recensies bekijken
Terug naar boven
Over ons
Verkoop bij ons
Amazon-betaalmethoden
We helpen je graag
© 1996-2021, Amazon.com, Inc. en dochterondernemingen