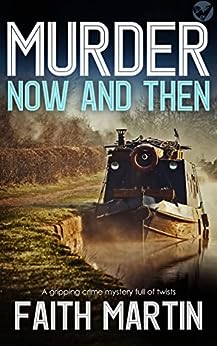 ONE OF THE WORLD’S FAVOURITE DETECTIVES RETURNS.

A BRAND-NEW MYSTERY FROM THE TWO-MILLION-SELLING AUTHOR.

Former Detective Hillary Greene and her cold case team are taking a fresh look at the unsolved murder of Michael Beck, found bludgeoned over the head and dead in a river near his home in 2012.

Just twenty-two at the time, he’d recently finished a history degree and had his whole life ahead of him. Everyone said he was a pleasant sort of lad with a passion for the past, quietly living with his parents until he could afford a place of his own. But it quickly turned out that there were at least two people who might have wanted him dead.

The first, his recently-jilted girlfriend Mia de Salle, hadn’t taken the break-up well. The second, his former tutor Dr Timothy Durning, had been accused of sexual harassment by Michael. But the original team could find no forensic evidence linking either of their prime suspects to the crime, nor witnesses placing them in the area when Michael was killed.

Hillary, however, is determined to find fresh leads. But while she and her team get to work, in the city of Oxford two men from the city’s criminal underbelly have been viciously murdered in the last six months.

Are the recent murders and her own cold case linked? More than a decade later, has the same killer struck again? And if so, what’s the connection between the mild-mannered young man and the underworld criminals?

It’s up to Hillary to stop a killer getting away with murder — both now and then.

WHAT READERS ARE SAYING ABOUT THE BESTSELLING SERIES:

“So glad Hillary is back - absolutely loved the other books in the series and really enjoyed this one too.” Nerys

“Would give more than 5 stars if I could.” Barbara

“The plotting is perfect, as always, with plenty of twists and red herrings.” Amanda

“Once I started reading her newest cold case, I was once again hooked.” Renee

“I love Faith Martin and enjoy every book that I read from her, and this book definitely ranks high on my list.” Robin

THE DETECTIVE
DI Hillary Greene: An attractive, single woman just over fifty, Hillary Greene was a police officer of many years’ experience (earning the rank of DI) and came up through the ranks. Consequently, she knew how the system worked, and was always fiercely loyal to the force without being blinkered to its faults. Forced to retire early through no fault of her own, she has now returned to the force as a civilian consultant on cold cases.

Join the Joffe Books mailing list to be the first to hear about Faith Martin’s new series coming soon.

Faith Martin was born in Oxford, and has spent all her life within twenty miles of the university city, even working at Somerville College for six years before turning to writing full-time. Faith has been writing for nearly 30 years under four different pen names and has had nearly 50 books published so far. She began writing romantic thrillers as Maxine Barry, which Joffe Books are in the process of re-releasing as brand new eBooks. Then she turned to crime, and as Joyce Cato wrote classic-style whodunits, since she's always admired the golden-age crime novelists. But it was when she created her fictional DI Hillary Greene, and began writing under the name of Faith Martin, that she finally began to become more widely known. Her latest literary characters WPC Trudy Loveday, and city coroner, Dr Clement Ryder, take readers back to the 1960's and the city of Oxford. Having lived within a few miles of the city of dreaming spires for all her life, both the city and the countryside/wildlife often feature in her novels. Although she has never lived on a narrow boat (unlike DI Hillary Greene!) the Oxford canal, the river Cherwell, and the flora and fauna of a farming landscape have always played a big part in her life - and often sneak their way onto the pages of her books. Her hobbies include walking her now ageing dog, wildlife-watching, reading and (reluctantly) gardening. --Deze tekst verwijst naar de paperback editie.

Lorna
3,0 van 5 sterren Decent story
Beoordeeld in het Verenigd Koninkrijk op 27 september 2021
Geverifieerde aankoop
Decent enough story but I was irritated by Hillary being constantly referred to as Ma'am. As a civilian she was not entitled to that form of address and should have corrected the chap. Also, if your car is needed in the course of important police work you would not drive a temperamental "Puff The Tragic Wagon". You'd get something more reliable. Just sayin'.
Meer lezen
7 mensen vonden dit nuttig
Misbruik melden
Vertaal recensie in het Nederlands

Amazon Customer
5,0 van 5 sterren Hilary Greene in a other mystery
Beoordeeld in het Verenigd Koninkrijk op 2 oktober 2021
Geverifieerde aankoop
Another fabulous mystery from Faith Martin in the Hilary Greene series. Out of all her books this series is the best. As always there are various people you think is the killer. Love how she connects all the dots together to bring the story to a great end. I like how you also have the continuity of some of the characters which gets you engrossed in their private lives too. Highly recommend Hilary Greene books. Only downside is I preferred it when Hilary was a DI and not a consultant. Great book though.
Meer lezen
3 mensen vonden dit nuttig
Misbruik melden
Vertaal recensie in het Nederlands

Guy
5,0 van 5 sterren Another excellent mystery.....
Beoordeeld in het Verenigd Koninkrijk op 8 november 2021
Geverifieerde aankoop
Wow, we are up to book #19 in the Hillary Greene murder mysteries! These are excellent tales by Faith Martin and this one is no exception.

Hillary is tasked with solving a 10 year old "cold case" murder. However, is it linked to more recent events?

If you like Faith Martin books, you'll enjoy this one too 👌👌
Meer lezen

5,0 van 5 sterren Another excellent mystery.....
Beoordeeld in het Verenigd Koninkrijk op 8 november 2021
Wow, we are up to book #19 in the Hillary Greene murder mysteries! These are excellent tales by Faith Martin and this one is no exception.

Hillary is tasked with solving a 10 year old "cold case" murder. However, is it linked to more recent events?

If you like Faith Martin books, you'll enjoy this one too 👌👌

Kindle Customer
5,0 van 5 sterren Who dunnit? brilliant read
Beoordeeld in het Verenigd Koninkrijk op 11 april 2022
Geverifieerde aankoop
Wow! A page turner that had me on the edge of my seat. Finishing the book, I can at last take a breath.
Once again Hillary is on the case; not as a DI but as a person who solves cold cases.
Loads of twists and turns as her and her two partners try to work out who killed Michael.
One thing leads to another as Hillary suspects the killer is also responsible for murdering two more victims who had recently been murdered. This case gets more interesting as the pieces of puzzle finally begin to fit.
Once again Hillary puts her life into danger when she goes to question the suspect......
No spoilers. Readers of Faith Martin should enjoy this book.
5 * from this happy reader. Looking forward to the next in this series.
Meer lezen
Misbruik melden
Vertaal recensie in het Nederlands
Alle recensies bekijken
Probleem melden
Bevat dit item ongepaste content?
Melden
Denk je dat dit item in strijd is met een auteursrecht?
Melden
Bevat dit item kwaliteits- of opmaakproblemen?
Melden